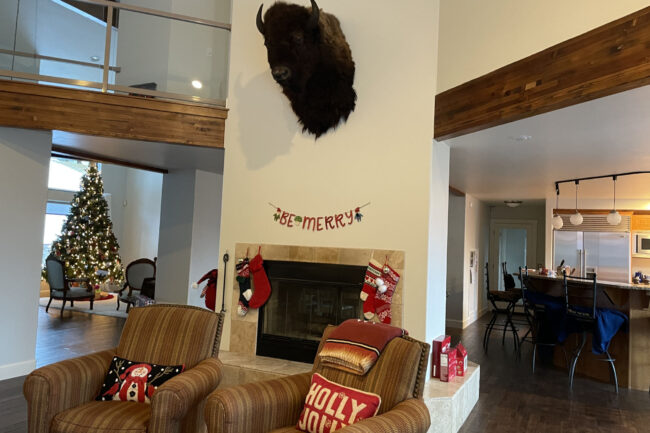 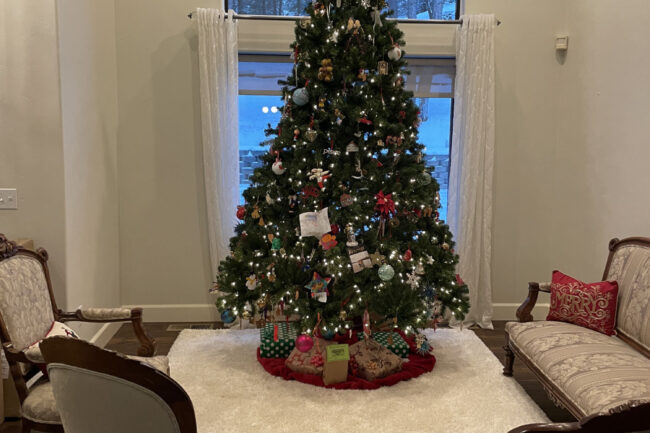 I guess I first must qualify that I’m one of those on the team of loving all the Christmas traditions, the decorations, hot cocoa, fire crackling in the fireplace and the place decked out like Martha Stewart sailed through and waved her magic wand over the place. The plan in place (there’s a clue), I decorated the Montana homestead by mid-November – knowing that business and other appts would have me out and about for a month and I wanted to walk in mid-December to all the décor and sparkles welcoming me. My son and daughter-in-law, my daughter and my son- in-law and all the grands were all set to be here.

Then I received a call from my Australian friends visiting America (a family of six)…their plans thwarted by a choice of lock down in Europe or 2 weeks quarantine in Australia… Could they come to Montana to celebrate Christmas with us? Yes! Gladly!

I ran out and got a couple of air beds to be sure there were plenty of places for heads and oh…more linens and duvets to snuggle down into bed.

Oh…and the cousins all gathering in town for festivities. Could they drop by to see us on the 27th? Yes! Sure!

And then the unraveling began to unfold…

My son, on the design team of the James Webb Telescope (register here to watch the launch) announced that the launch was delayed. It was now scheduled for December 22nd so he wasn’t able to come to Montana until then.

So, I leave some presents at their home, so they have something to open on Christmas (mostly for Stanley…2 months and too young to have any clue).

My friends from Australia…whew, too challenging to find 6 tickets to this Kalispell area and rental cards for six? Non-existent! When the heck is American Airlines going to get a clue and do year round flights from both ends of the country to get to Glacier International Airport??!! So my friends opted for Mexico…American lost out on 6 round trip tickets and goodness knows the thousands of others who have to fly United or Delta, have layovers and $2000 round trips instead 🙂

My son in law driving all the snow board and ski gear to Montana broke down in the middle of nowhere in Southern Utah…closer to Las Vegas than Salt Lake City.

I felt sooooo bad for him!

After debating, the least painful solution in order to arrive at the end result (joining the family in Montana) was to rent a U-haul van (to fit all the cargo). He dropped it at a friends home in Vegas and searched for luggage to tote it all to Kalispell. He then caught a flight at 0-dark-30 on the 24th – two days after his hoped arrival.

Thinking all is set…on the Montana end…I am shopping up a storm in between snow fall and 5 degrees. Food for Christmas Eve…Ratatouille…Christmas-American Pot Roast with asparagus Mixed salad and Pumpkin Pie… Then for the 27th with all the extended tribe…Prime Rib and all the accoutrements….I order the Prime Rib! Whew! Just in time, the butcher says, I have the last one (should have been a clue). Off to Target for table gifts and stocking stuffers…I think my family eats socks! Seriously! They are always down to 3!…you know that washer eats them!!

Then Costco, and Albertsons, Rosauer’s, Natural Grocers…and the bank!..(Oh if I had ONE wish for Christmas…Please Santa bring me Trader Joe’s!! The only thing Montana lacks! Really!!)

The phone rings…the butcher…he had made a mistake the prime rib was not there. Someone had picked it up, NO!!! The phone rings again…oh no he has it…the other shop had one. Yay!

I am hunting again for the rib roast….

The snow is falling in big, huge flakes! My beautiful grand kids are sledding down the back yard slopes and the fire is crackling (after I had the chimney sweep clear the squirrels’ nests from all the years of their antics). In the process we even discovered there is a gas starter! Bonus! 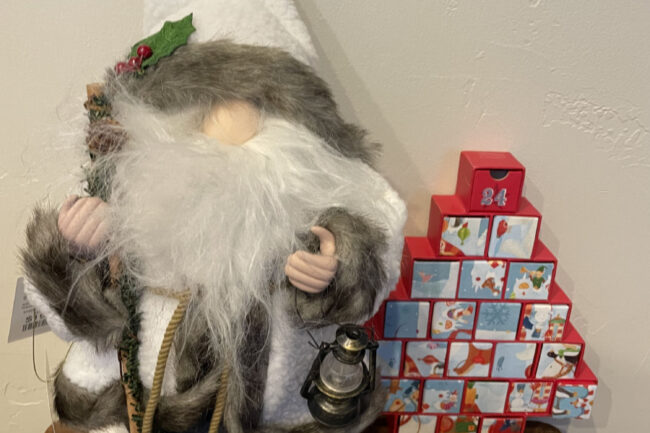 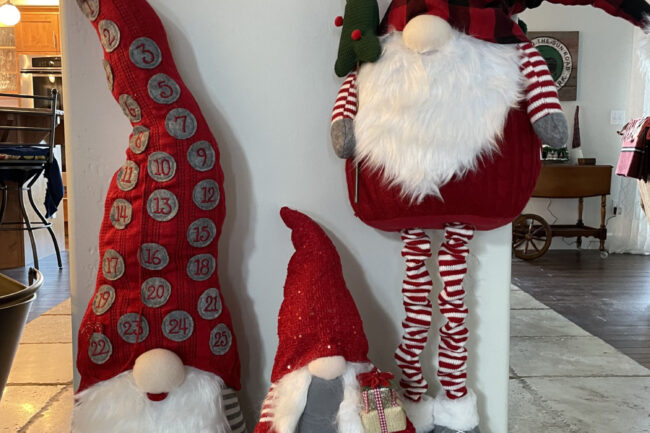 All of this to say…I’m having quite the Dynamic Christmas!

The truth is, no matter what…there is a real reason for all this hustle and bustle decorating and celebrating….and your focus.

Charles Shultz captured it beautifully in A Charlie Brown Christmas. As an angel of the Lord appeared and said “Do not be afraid, for behold, I bring you good news of great joy which shall be for all people for today in the city of David there has been born a savior, who is Christ the Lord”… “And the angel joined by a multitude praised God saying, Glory to God in the highest , and on earth peace among men with whom He is well pleased.”

Once again, it is focus…focus on the reason we celebrate. I am grateful for my family both near and far and my friends all around this globe who I hold so valuable to the richness of my Dynamic Life…..

Wishing you the most amazing holiday season and moments that are memory making that make to sit up and say, Life is Good!! Thank you!

Please join me at Dynamic Life: DynamicLife.com for how you can make your life more of what you would love. 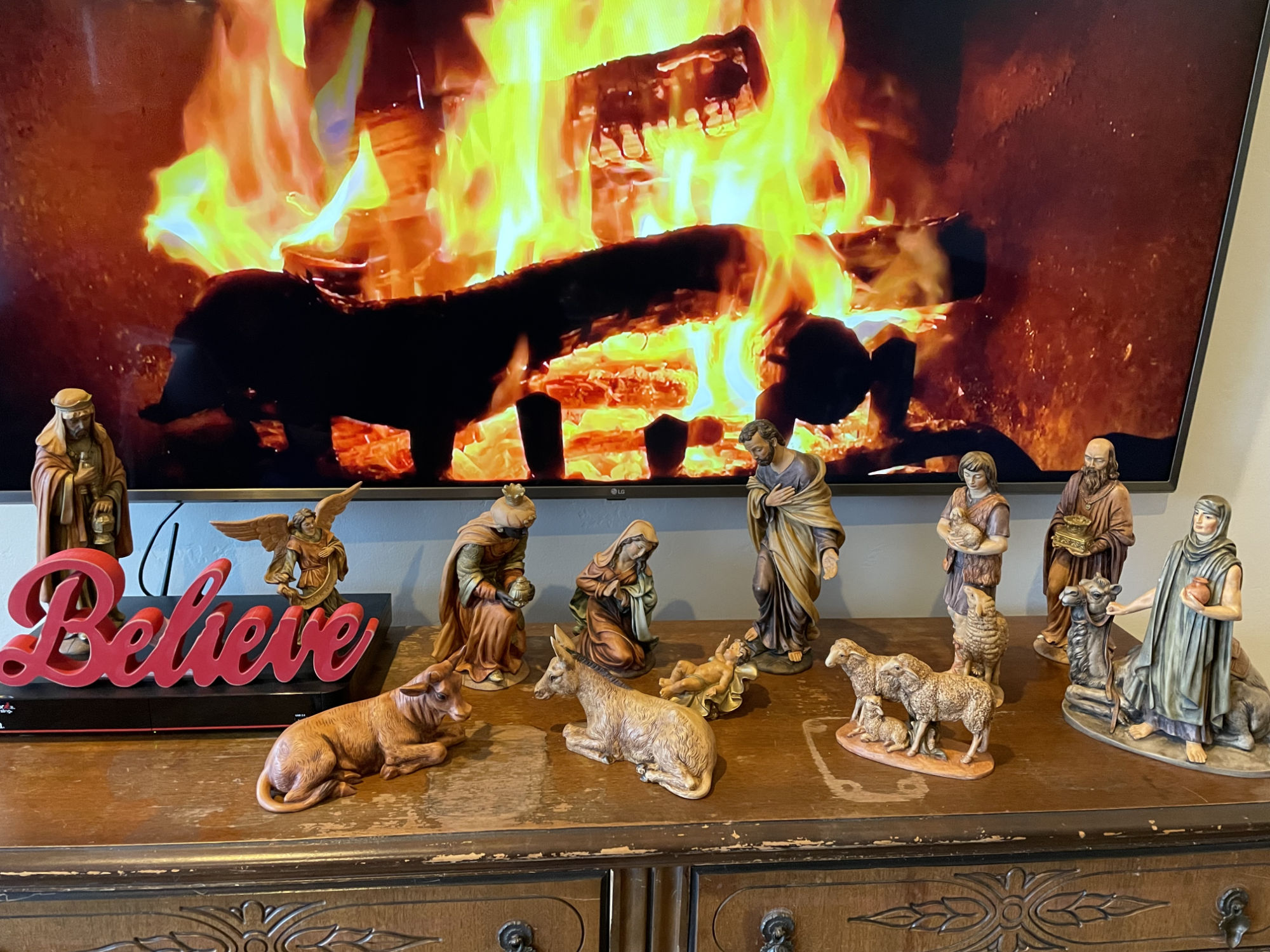